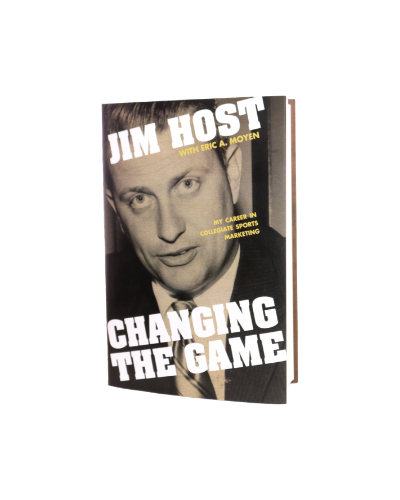 If you like “behind the curtain” Kentucky Wildcats sports stories, you will enjoy a new book from Lexington’s Jim Host.

In “Changing The Game: My Career In Collegiate Sports Marketing,” Host reveals some of the inside information he gleaned during his company’s many years as the radio and local television rights holder for broadcasts of UK football and men’s basketball games.

You will read how cut-throat negotiator Rick Pitino kept leveraging a desperate UK for more and more money while in talks to replace Eddie Sutton as the Wildcats’ men’s basketball coach in 1989.

There is new insight into Duke’s role in Kentucky’s early 1990s flirtation with joining the Atlantic Coast Conference.

However, my favorite is the back story on how UK came to shock the college football world in 1989 by hiring the Alabama Crimson Tide head football coach.

It turns out, the process that brought Bill Curry to Lexington from Tuscaloosa was launched by Curry’s boss, then-Crimson Tide athletics director, Cecil “Hootie” Ingram.

“I remember it like it was yesterday, I was in the Atlanta airport and Hootie calls me out of the blue,” Host said. “… He said, ‘I really need your help and I want you to keep it confidential.’”

The Alabama AD then asked Host to inquire if then-UK AD C.M. Newton — who was seeking a replacement for the retiring Jerry Claiborne — would have interest in hiring Curry.

This even though Alabama had gone 10-1 in the 1989 regular season. The one defeat, however, came against archrival Auburn — dropping Curry to 0-3 as Bama coach vs. the Tigers.

Says Host: “I said to Hootie, ‘You are kidding me. Good God, (Curry) only lost one game.’ Hootie said, ‘Yeah, but he lost the wrong one.’”

When Host called Newton to tell him the 10-1 Alabama head coach might be available to UK, “C.M. couldn’t believe it,” Host said. “There’s no way C.M. would have ever even tried to get Curry. He would have thought he was untouchable.”

Did Newton ever realize Alabama was orchestrating Curry’s move to Kentucky?

“Well, he obviously figured it out after the fact,” Host says. “But, I think (Newton) knew (before that). He knew the way Alabama football fans were.”

The UK sports stories are a secondary part of “Changing The Game” (which is available at www.jimhostbook.com). Co-written by Mississippi State University education professor Eric A. Moyen and published by the University Press of Kentucky, the book’s primary focus is Host’s business career, especially his role in launching the concept of collegiate sports marketing.

In the early 1980s, Host pitched a skeptical Walter Byers, the longtime (1951-1988) NCAA executive director, on the idea of selling sponsorships for the men’s NCAA basketball tournament to corporations.

“It sounds like you are trying to sell air,” Byers replied.

Eventually, Host convinced Byers that corporations would be willing to pay big bucks for the right to use the “NCAA” and “Final Four” logos to promote their own brands. In 1984, Gillette and Valvoline became the first corporate sponsors in NCAA tourney history, each paying $500,000 for the chance.

“I wanted (“Changing The Game”) to trace the history of college sports marketing because it’s never been written,” Host says. “I wanted it to be a text book or something (colleges) could use as a reference tool.”

At 82, Host is retired. However, a workaholic’s retirement still involves labor.

Over his career, Host played significant roles in the construction of both Lexington’s Rupp Arena and Louisville’s KFC Yum Center. Now, he has been utilizing his knowledge of how to get sports venues built to aid the Louisville Urban League in its goal of constructing a $50 million indoor track-and-field facility in that city’s West End.

According to the Urban League website, the goal of the project is to make Louisville “a world-class destination” for track and field events while also “spurring economic and community growth for black businesses and families.”

Host says Sadiqa Reynolds, president and CEO of the Louisville Urban League, “called me, it’s been about three years ago, I guess, and asked if she could hire me for $1 a year. I said, ‘Yeah, I’m cheap.’”

Before the coronavirus pandemic intervened, Host had been going to Louisville several times each week trying to help make the proposed track and field venue a reality.

“We’ve raised most of the money,” Host says.

Meanwhile, Host says the best part of having written a book is that it has given former employees with whom he had lost touch a reason to reconnect.

“Changing The Game” also reveals one heck of a story about Alabama’s behind-the-scenes machinations to get Kentucky to hire the Crimson Tide football coach.

“How about that?” Host says. “There is no rivalry more intense than Auburn-Alabama. The Tide people could not stand losing to Auburn.”