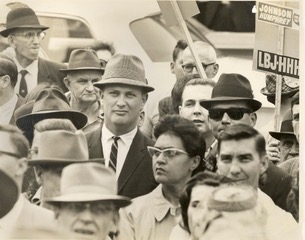 LOUISVILLE, Ky. (WDRB) — Whenever college sports return, they will require a playbook.

A playbook — long before the games, practices and competition resumes — on how to put fans at ease, how to rebuild their following and how to market their product

The life’s work of Jim Host has provided that playbook. Host, a businessman based in Lexington, Kentucky, won’t say it, but I will: The man who created sports marketing at the college level should be on speed dial of every athletic director as they attempt to navigate today’s uncertainty created by the novel coronavirus outbreak.

If you thought Host would quietly disappear after he was the driving force who made certain the KFC Yum! Center was completed at Second and Main streets a decade ago, you’ve forgotten about this man’s unrelenting DNA. At 82 years old, he has now arranged and presented his thoughts, principles and memories in textbook form.

Host (and Eric Moyen) published a book, “Changing the Game: My Career in Collegiate Sports Marketing,” through the University of Kentucky on March 10. The book became available one day before the suspension of the NBA season due to COVID-19 concerns officially pushed sports into the “In Other News” category.

Relentlessly optimistic, Host said that he believes the games will return. But the challenges to attract and maintain fans will be significant.

“I sure have thought about it quite a bit,” Host said. “When I put myself in the place of ADs (athletic directors) and talked about the difference in revenue they’re going to get in the next couple years.

“No. 1, I don’t think ticket sales will be anywhere close to where they have been, simply because of the fact that people are going to be conscious to who they sit next to and how they sit. Are these athletic departments going to space seats when they do season tickets? Are they going to put people apart from each other? How are they going to handle all this?

“This will be an ongoing thing for some time. People are always going to be conscious now, especially if this thing comes back or if other viruses start to surface. I think it’s going to be a constant thing that universities are going to have to pay a lot of attention to.”

Declining revenues are certain to cause reassessments of programs, staffing and other expenses. Iowa State athletic director Jim Pollard was the first Power Five athletic director to address the issue when he announced nearly $4 million in pay cuts and staff reduction for that Big 12 program on Wednesday.

“I hope it doesn’t cause some universities to lose sports because of the costs,” Host said. “But I suspect that is going to happen. I think a lot of the progress we’ve made in what I call non-revenue sports is going to go by the boards.

“But I think the SEC (for Kentucky) and the ACC (for Louisville) have done a good job of putting their networks together to where there is revenue that is going to come to those networks in the future,” he added. “Those will always be worth a great deal because people are still going to watch the games. Live content will always rule, which is why the NFL and NBA will always continue to be successful.

“But there’s going to be a lot of difference in how people view (events) on site. And I really don’t know how, when you get outside the Power Five (schools), these other schools that are trying to compete are going to be able to make it.”

Host was a college baseball player who believes he would have pitched his way into the big leagues with the Chicago White Sox if he had not injured the rotator cuff in his throwing shoulder.

Host could not longer throw but he has always been able to pitch.

He started changing the game in 1972 with Jim Host & Associates in Lexington. He convinced the University of Kentucky’s athletic department that marketing opportunities were greater if the rights from different teams were bundled.

He remembers selling a deal with Coca-Cola for the athletic department and then bringing a Coke executive to Commonwealth Stadium for a football game in the 1980s.

Imagine the concern when Host and his guest noticed crumpled Pepsi cups littered near the UK bench. It turned out that football coach Jerry Claiborne also had a deal — with Pepsi.

“We had to get everybody on the same page,” Host said.

That quality is a Jim Host speciality. For decades, his company, Host Communications, published game programs for NCAA events including the men’s basketball tournament. Host also handled the rights to the radio broadcasts, working with the NCAA to grow the Final Four from a regional event to one of the top weekends on the sports calendar.

Host said that he considered former NCAA executive director Walter Byers the most intelligent man he ever encountered.

He mentioned the idea of corporate sponsorships for NCAA events to Byers several times.

Times changed. So did Byers. As was his habit, Byers would call Host with ideas and then direct him to meet him as his office in Shawnee Mission, Kansas, (the former site of NCAA headquarters) the following morning. Host remembers scrambling to fly to Kansas City and then making the 45-minute drive to NCAA headquarters.

During one meeting in 1983, Byers asked Host how much the NCAA could generate from selling one corporate sponsorship to the men’s basketball tournament.

Byers was intrigued. If Host could make the sale, Byers asked if he would be willing to split the money with the NCAA.

Host made his first sales pitch in Boston to executives with Gillette. He offered the shaving company the opportunity to become an official sponsor of the NCAA Tournament. A limited number of tickets would be made available. Perhaps Gillette could reward its top sales person for a job well done.

They asked Host for the cost of the sponsorship?

Hold on. Host was not finished. He never is. He never will be.

Before the 1984 Final Four was played in Seattle, the NCAA also signed marketing deals with Pepsi and Valvoline for $500,000 each.

We all know where it has gone from there. It’s also in the 296-page book.

So are so many other trademark Host stories: the U.S. presidents he has met, the challenges of getting the KFC Yum! Center built and his belief that Louisville can still secure an NBA franchise.

But, mostly, Jim Host has written a playbook for how to market college sports programs — a playbook that will never be more valuable than it is today.

Priced at $32.95, “Changing the Game …” is available at JimHostBook.com. Copyright 2020 WDRB Media. All rights reserved.